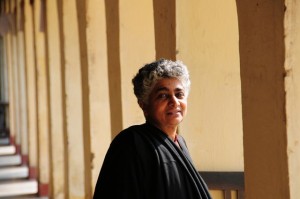 After getting undergraduate and postgraduate degrees from the Department of Botany, University of Delhi (1969-74) and teaching for two years at Miranda House, University of Delhi (1974-76), R. Geeta joined the Agricultural Research Service, working at the Indian Institute of Horticultural Research and then at the Central Marine Fisheries Research Institute (1976-1987). She went on to get a Ph.D. degree at the Department of Ecology and Evolutionary Biology, University of Arizona, Tucson, working with Michael Donoghue (1987-1993). R. Geeta was awarded the Katherine Esau Postdoctoral Fellowship to work at the University of California at Davis with Jim Doyle, Judy Jernstedt and Neelima Sinha (1994-1997). She joined the faculty of the Department of Ecology and Evolution at SUNY Stony Brook and was there from 1997 to 2009, after which she left Stony Brook and the US to join the Department of Botany, University of Delhi, in 2009. Full circle. She retired from DU in 2018, and is now based in Chennai, where she continues to think, talk and discuss about evolution and phylogenetic biology, as well participating in  science communication at diverse levels, harking back to initial forays with the Tamil Nadu Science Forum in its starting phase.