Cats long have been part of my mother’s household, but only in the past 30 or so years of her life, after my father moved to Madras on retirement. It is mostly the case that she and/or various household help over the years feed strays that came by, worry about kittens that might be laid in different parts of the house, protect mothers and babies from ravaging tom cats, worry when they go missing, but the cats rarely actually live IN the house — except for the cat nurseries that they periodically set up in there.

A somewhat different situation develops over the past five years or more, when two female cats take up residence in the house after repeated kittening (yes, it is a word, I looked it up). Both are just ‘poonai’ but descriptively, ‘karuppu’ and ‘poo’ (a term that amma fancifully uses to distinguish her mottled yellow black and white flower-like colouring from mostly-black). 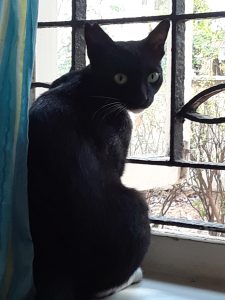 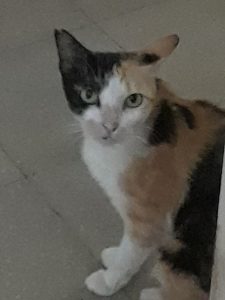 They have a history — karuppu is the mother, and poo, her daughter, is neurotic. Even after poo gets older (adolescent?) the two continue to frequent the garden area, where they get fed, they are very close, and get along well. 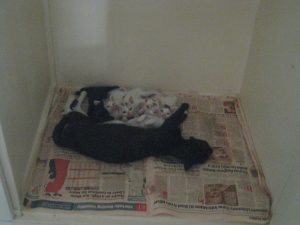 The following (?) year when karuppu sets up a nursery again, the kittens are born, they start feeding and well!! poo too gets fed on the side…. what???!!!! My mother (with the help of my sister, who is visiting, and the Blue Cross) gets karuppu spayed 40 days after kittening, because, no thank you, no more nurseries in this house, she (amma) is getting too old to deal with the strain. 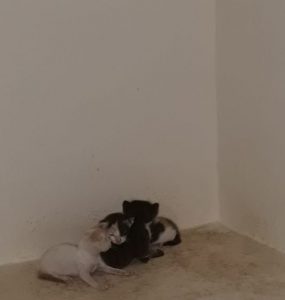 So, of course, the next year neurotic poo sets up nursery, I am visiting and realize that she has no idea of how to mother her kittens, and eventually one kitten dies, the other two survive, it is now 40 days….. 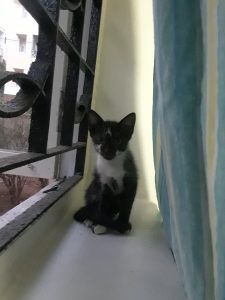 ….The kittens get given away and poo is spayed. 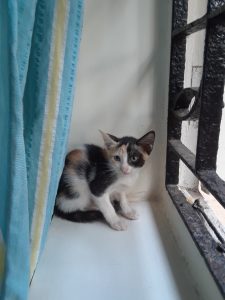 So, happy families — mother and daughter continue to come by, my mother will not tolerate them living in the house, but they sneak in and use beds, cushions, whichever, whenever and however possible, and life goes on in some wise.

Now we need to talk about Sriram, who is the main cat person, who gets along with all the cats, and keeps them fed when he comes to make amma’s food everyday. Many of us (visiting children, grandchildren) have a soft spot for karuppu, perhaps because neurotic poo is so skittish, Sriram is the only one whom she responds to.

Last year, I move to Chennai, karuppu and poo are in residence in the room that is now ‘mine,’ plus, there is an aged, half blind male cat, who ‘owns’ the garden and regularly steals the females’ food while also getting fed himself. And so life goes on, there is some sort of equilibrium among male and female feline and human lives, interspersed with yowling mating-time competition, but no kittening. 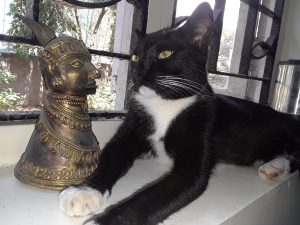 (generally, karuppu is in my room and poo in the dining room, but these days both are in my room)

And the new year rolls in and, even before COVID-19 strikes this region of the world, things start changing. First, January mating season and contending tom cats doing their yowling and, it seems like, lots of hissing and the like. Then in March the old male cat disappears, we suppose that he has gone to cat heaven. And then gradually (i.e., it takes me 1-2 month to recognise what is happening) the status quo changes.

Mating season again? Strange kind of mating, where this light brown male cat chases karuppu up the guava tree and keeps her there, crouching and scared. He starts coming inside the house, entering through a door near the kitchen, sauntering across the dining and sitting space, finally stalking out through the door opposite. And spats at night, but now INSIDE the house when, as I realize later, the male is intimidating and chasing away the females.

HE IS ESTABLISHING TERRITORY. 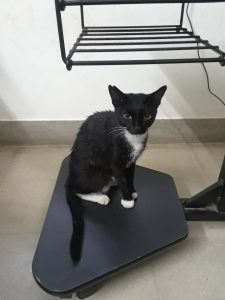 DAMN I did not realize this until it is maybe too late. Sometime toward the end of April, both cats disappear for several days. This coincides with the lockdown, and I wishfully think that maybe some kind fish-eating household, whose members are now at home a lot, has adopted them. They come by late in the morning, demand a couple of treats and then disappear again, then poo returns to the dining room and karuppu a couple of days later, bedraggled and wet from rain the previous night.

So now it is a constant battle…male cat comes by every so often (5-10 days?) to assert his ownership of area, I chase him with shouts and water spray (when I am coordinated enough to get at the bottle in time), he yowls and attacks the females ever so often, they cower and disappear for a couple of days, and then business as usual….

So, you animal behaviourists and cat lovers out there–what is the prognosis? where do I stand in this business? do I have a hope of reestablishing territory for the females? more generally, how do male and female feral cat territories work? am I to defend my territory from now on? forever?