Two letters from the IT office. Don’t dare open them. Finally do, in the presence of sister and cousin after getting to Chennai (well, the letters came just before I left to go there). AAAARRGGHHH I owe them moneys?!! Quite a lot!!??! Oh, they are demanding tax that already paid — but they have no record of it.

Decide not to battle with IT web site (however friendly). Instead, find friendly CA. Hand over task. She clears up last year’s problem, but there is an issue with the previous assessment year (AY) 2014-15. Which, for the uninitiated novice, is the year you pay tax for income earned in year 2013-2014. I feel like an uninitiated novice every time tax-return time rolls around, and apparently I had filled in the wrong numbers when making the payment at the bank–i.e., made that AY 2013-14 instead of 2014-15. And therefore it did not make its way into my account that year.

[Dare I question why it was not paid into the previous year’s tax account and found redundant? Should I even go there?]

Anyway, the friendly CA says that I had to deal with this one in person. Visit the IT office. Pratyaksh Kar Bhavan. Aha. I know just the person to ask about that. My colleague, who spent several hours on several different days a couple of years ago dealing with a similar (same?) problem. He gives me lots of gyaan, including what to do first (get entry pass), go directly to the person involved rather than via reception, as well as directions from the New Delhi Railway Station (NDRS) metro station.

So, as planned, board a metro at about 9:45 am, get off at NDRS (crowded, have to plan getaway including route up to and out of less crowded door). Walk past the railway station, ask policeman 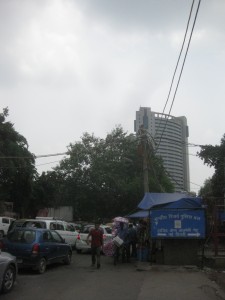 about how to get to the IT office. Blank stare, he turns to his companion, who looks blank too, so I say never mind, I think that tall building is where I need to head. Oh but that is the Civic Centre. That’s it!! The landmark that my colleague told me about (which, obviously, I had put out of my head).

So march on (hold nose all the way past and beyond the railway station–one big urinal, despite the large number of शौचालय’s), past a long row of shops, including a series selling मुर्ग़ चावल (first time I’d seen such, and oh in case you are wondering, after the vast urinal), past a sign pointing to the transit camp at Ajmeri Gate and on to my target, Pratyaksh Kar Bhavan.

Get pass (for the day), pass from the gritty urinal to a world of grassy slopes, vast space and enormous buildings abutting ancient dilapidated housing (a grey day, threatening to rain, very very humid). 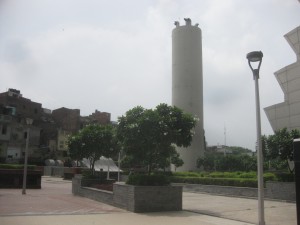 Look around. Hmm. Block B? Let’s try it. Approach, flash my pass at the chowkidar, enter the building, get waved in by a woman at counter on the right, get into a large hall (reminds me of several of the Mughal and earlier monuments of Delhi, or, perhaps, Putrajaya the administrative centre in Indonesia). Ah. Reception. I go and wait behind someone as he talks to the person at the counter, and who is navigating something on a laptop, going through the unlikely/unusual  moves of logging into some sort of account, trouble-shooting … wow, some reception person, I think, and shortly find out that he is a “private CA” doing consultancy in the middle of a government office. What???

Finally, I find the actual reception (which is a large, signless enclosed space on the right), am asked आप कहाँ हैं? Huh? No she does not literally want to know where I am, nor where I live, but where I work; using that information she tells me I have to go to Ward 70(2), Block D, third floor.

Get there, find friendly Mr Jatinder, whose efforts reveal, after I have gone through the motions of making an application, getting a xerox copy of it with a “received” stamp and actually (really?) am on the verge of getting the necessary change made, yes, almost, just get into my account, but….”आपका PAN card Ward 35(5) में है! I cannot make the change, you have to ‘migrate’ your card from Ward 35(5) to Ward 70(2)!”

So near, yet so far! Nevertheless, Mr. Jatinder is most helpful, tells me whom to write a letter to, where to go (Block E2, maybe floor 12 or 13). Come back here once it is migrated, and I will make the change in a jiffy, he promises.

I navigate my way to Block E2, (just behind Block D, surprise, surprise), get to the lifts, find the right one (no no, those only go to floors 15 to 30), find my way to floor 12. No, this contains Ward 42 and upward. I am sent to floor 11 and then 10 (all done via the stairs), and  finally find Ward 35 (5) where the friendly officer directs me to the right person (The Nodal Officer) on floor 8, not only that, he sends someone to escort me there, I deposit my request, get a copy  (“received”), but no phone number, just a name that I will have to chase down after a couple of days … looking for the migration of my poor PAN card from 35(5) to 70(2) … would that be by road, rail or air, I wonder … and make my way to the University, about two hours after I left home.

But really, they’ve all been very helpful. When I was recounting this experience to a friend, she asked, could not the CA have done it? I don’t know, but I don’t exactly mind (too much) these occasional forays into the mad mad world of bureaucracy.

And now, about two weeks later, miracle of miracles, the PAN has ridden, swum, flown, somehow migrated to its rightful ward. The wondrous world of bureaucracy. Thank you, thank you!

This entry was posted in Life is like that only, People, Red Tape aka Governance. Bookmark the permalink.